Research Bites by GenoPalate: More than 25% of Gen Z’s are limiting their meat consumption

Plant-based diets have increased in popularity even if the proportions of those who avoid any animal products (vegans) and those who avoid meat but typically still consume eggs and dairy products (vegetarians) remain modest. Surprisingly, we have seen at GenoPalate that the adoption of meatless diets is occurring across all age groups. An interesting finding is that the number of flexitarians (those who only eat certain animal products or do so in moderation) is rapidly growing, especially among Gen Z’s who lead the way in this category with 13.5% compared to a 10.8% average on the general population. Same trend is observed among vegetarians at 5.4%, 1.3% higher than the average. Veganism is higher among Millennials but with similar adoption across the rest of the age groups. Even though vegans and vegetarians still comprise a small percentage of the population in the US (~7%), the amount of people actively trying to reduce their reliance on animal products is rapidly growing.

Ready to Discover the Best Foods for Your Body Based on Your DNA? 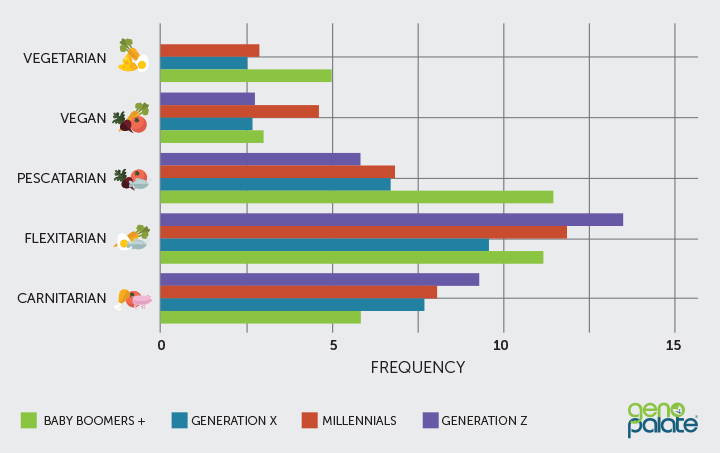 Diets, especially in Western countries, have been centered around animal products which makes it a challenge to move away from them. Those trends are changing however, especially among the younger Gen Z’s, and perhaps not unrelated, they are also the generation that show the most concern about the environment. It is worth noting that individually the numbers per category do not seem high, but that changes if we start adding them up. Among Gen Z’s, vegetarians (5.4%), vegans (2.7%), flexitarians (13.5%) and pescatarians (5.8%), represent 27.4% of their age group, meaning that over one in four Gen Z’s partially or completely avoids meat-based diets. These numbers should be taken with a grain of salt though. Pescatarians (those who limit their meat intake to fish), might be consuming fish on a daily basis, not really limiting their total meat intake, and behave more like Carnitarians (people who do not eat seafood) who might simply dislike seafood but indulge with other meats. Interestingly we found the pescatarian diet to be highly popular among Baby Boomers and older generations. Even though we saw clear trends led by Gen Z’s, those differences in diet preference did not reach statistical significance tested by the chi-square method in 2,260 study participants (Methods and Cohorts). The preference distribution among Gen X and Baby Boomers did differentiate themselves enough from the average to reach statistical significance, but barely so, which shows at the end that the adoption of these trends only differ slightly across generations. We did see however that women are adopting these preferences in larger numbers than males, and this trend did easily reach statistical significance.

Ready to Discover the Best Foods for Your Body Based on Your DNA?

Previously, there were concerns regarding certain nutrient deficiencies in individuals who avoid meat, though, due to more recent studies those concerns are no longer as prevalent, in fact, there are an increasing number of studies showing lower levels of type 2 diabetes, obesity, cardiovascular disease and certain types of cancer in populations that follow plant-based diets1. The reasons an individual chooses to abstain from meat or animal products are varied. These reasons may include religion, animal welfare, carbon footprint and general health, broadly clustering into those that do it for health reasons and those who do it for ethical reasons, which makes a difference regarding adherence (2). The adoption of plant-based diets is greatly influenced by culture and geographical region. In the US and Germany, for instance, about 5% of the population choose these kinds of diets (3,4), while in Canada and India, they reach 8% and 30%, respectively (5,6).

Are there risks about switching to a meatless diet?

Only recently the majority of people started to perceive vegetarian diets as healthy. That is not the case for vegan diets where the general perception remains negative with most people considering it deficient (4). But is it true that vegan diets are insufficient? That perception is grossly exaggerated. A large number of pro athletes at the top of their game follow plant-based diets. The list includes Serena Williams and Novak Djokovic, two of the most dominant tennis players, NBA stars Kyrie Irving and Chris Paul, NFL all-pros Tom Brady and Arian Foster, US women soccer super star Alex Morgan, and formula 1 driver and seven-time world champion Lewis Hamilton. The list goes on with many more athletes in all sorts of disciplines from long distance running to weight lifting and everything in between. Most of them are convinced that their level of performance is aided by their plant-based diet and not the other way around. Abstaining from animal products or limiting their consumption can have a positive effect on general health. Those who choose to change their diet should make sure they are getting all the nutrients they need, especially Vitamin B12, since plant-based foods that have not been enriched do not contain this essential vitamin. Vitamin B12 is needed in the production of red blood cells and lack of it can lead to anemia producing symptoms that include shortness of breath, tiredness and loss of appetite, to name a few.

Where do vegans and vegetarians get their Vitamin B12 from?

Vegetarians who continue to eat eggs and dairy products like milk, cheese and yogurt, will keep having a rich natural source of vitamin B12, but for vegans it is important to either take it as a supplement, look for items like cereals, tofu, tempeh and alternative milks that are often fortified with it, or procure the few natural vegan sources that have it like nutritional yeast, and some algae and some mushrooms. According to the NIH adults should have a daily Vitamin B12 intake of 2.4 micrograms (https://ods.od.nih.gov/factsheets/VitaminB12-HealthProfessional/).

Is it more expensive to follow a vegan or vegetarian diet?

Another gross misconception that is widely believed pertains to the cost of following plant-based diets. A study published in 2015 (7) showed that actually the opposite was true and that forgoing meat would bring average annual savings of ~$750. Meat tends to be the most expensive item in the food cart, but most omnivores believe that their budget would take a hit if they switched to a plant-based diet.

Is a vegetarian, vegan, pescatarian or flexitarian diet right for you?

Only you can answer this question. The food we consume is one of the most personal decisions we make. The amount of information available addressing our nutrition has never been greater. It can be overwhelming sifting through all of it, especially with so many new trends. The food choices you make will have an impact on your health, your budget and the environment. Some personalized nutrition services can be helpful in finding the right balance, especially if you decide to change the way you eat.

4. Paslakis, G. et al. Prevalence and psychopathology of vegetarians and vegans - Results from a representative survey in Germany. Sci. Rep. 10, 6840 (2020).

At GenoPalate we are committed to helping our customers improve their health through personalized nutrition. We are taking advantage of our rich database and the enthusiasm of our members to develop a research program that will help them, and our customers at large, better understand themselves and advance the nutrition and nutrigenomics fields in general. For those that have already agreed to participate in our research efforts, we are collecting, in conjunction with their genotypes, relevant information that includes their eating habits, food preferences, and general health, among many others. Soon we will be able to capture longitudinal data that will add a measure of progression towards their personal health goals. We find ourselves in the privileged position of having a large number of research participants (~40,000 people), which is rapidly growing. Such a large data set will give us the power to pursue a wide range of genomic associations that have not been previously studied and that will support the mission of GenoPalate.

As a service and customer-focused company, we have an ongoing relationship with our study participants in which we are attempting to positively influence their eating behaviors in order to reach their personal health goals and improve their general well being. Through this relationship there is the potential to track how much study participants are changing their eating behaviors, identify those that are seeing significant improvements and work on figuring out which genetic and non genetic factors might be responsible for these differences. Something that we at GenoPalate share with the customers we attract is a curiosity about our genetics and how they have an effect on how our environment (including what we eat) has different effects on us. Together we want to indulge this curiosity and ultimately be able to better understand ourselves.

Dr. Guillen is the Director of Research at GenoPalate. Dr. Guillen obtained his Ph.D. in Biochemistry from the University of Notre Dame. He trained as a Postdoctoral Fellow at the Medical College of Wisconsin in Milwaukee. Before joining GenoPalate, Dr. Guillen worked as a Staff Scientist at Texas Biomedical Research Institute and as an Assistant Professor for the Center for Precision Medicine at Wake Forest School of Medicine. His research efforts have included gene expression in colorectal cancer, genetics of hearing loss and developing tools to study DNA-protein interactions. Dr. Guillen is interested in understanding how genetics affect nutrition and how this knowledge can be applied to improve health outcomes and general well-being.